There are two primary kinds of pride: The first is based on a person’s delusional sense of his or her greatness with reality contradicting it. The second kind of pride is based on reality but attributes such greatness to oneself instead of giving glory to God. Mary carefully avoids both pitfalls. In yesterday’s gospel we heard the Angel Gabriel declaring her full of grace thereby excluding any delusions of grandeur. Today, she 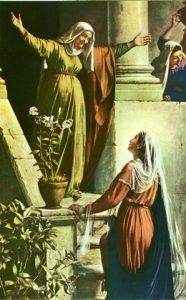 receives further affirmation from her cousin Elizabeth who declares: Blessed are you who believed. And in tomorrow’s gospel and her Magnificat we will hear her response—neither discrediting nor rejecting the praise, but, instead, seizing it as another opportunity to give glory and praise to the Almighty who has done such great things in her. Mary’s message to us is a simple one, but one that we struggle to learn: If you would become great, strive for that lowliness and humility that opens our hearts to the floodgates of glory pouring in through the King of Glory who, himself, became a lowly infant in order to lead us to glory and eternal happiness.