Abbot Joseph departed for the General Chapter of the Order of Cistercians of the Strict Observance on Sunday, 3 September. The overnight flight from Dulles to Fumicino, Rome allowed him to begin his trek to Assisi on the normal arrival day for the various superiors coming from all around the world. A bus chartered for the occasion took them to the Domus Pacis, a conference center on the outskirts of Assisi. Fr. Joseph emailed Holy Cross announcing his safe arrival–with no complications–and the beautiful weather greeting him. The Chapter had its first session on Wednesday, 6 September, allowing the participants to grow oriented to the conference center–and catch their breath–before they hunkered down to work.

We received another email from Fr. Joseph after the first day, as the capitulants settled down to their pastoral responsibilities, listening to the “House Reports” of all our communities. A House Report includes a brief survey of a community’s statistics and then focuses on it’s particular agenda, needs, projects, improvements or challenges, the general state of the community. After that, I imagine that Fr. Joseph was swept up into the relentless pace, agenda and responsibilities of the Chapter, since we haven’t heard from him since. There’s nothing unusual about that! It’s what happens to every superior at a General Chapter and it’s why the rest of us are grateful that we don’t have to attend.

The work of the Chapter is both pastoral and legislative. Pastorally, the superiors of our order listen to all the House Reports and are divided up into “commissions,” small groups that review in detail, with the appropriate superior, the individual House Report. The point is to support, encourage and work out concrete help, as needed, for each community. The legislative burden of the Chapter involves reviewing the current statutes–in rare cases, Constitutions–of our Order and effecting any necessary changes in our particular law, which co-ordinates with the Code of Canon Law for the entire Catholic Church. This can be the very tedious part of the Chapter, ironing our precise wording, shifting commas and all those exciting activities which normally generate lawyer-jokes. But the work itself is no joke and often befuddles even the most astute and practical minds.

When Fr, Joseph returns from the Chapter may we in the community–and life itself–grant him some unencumbered days to recuperate! 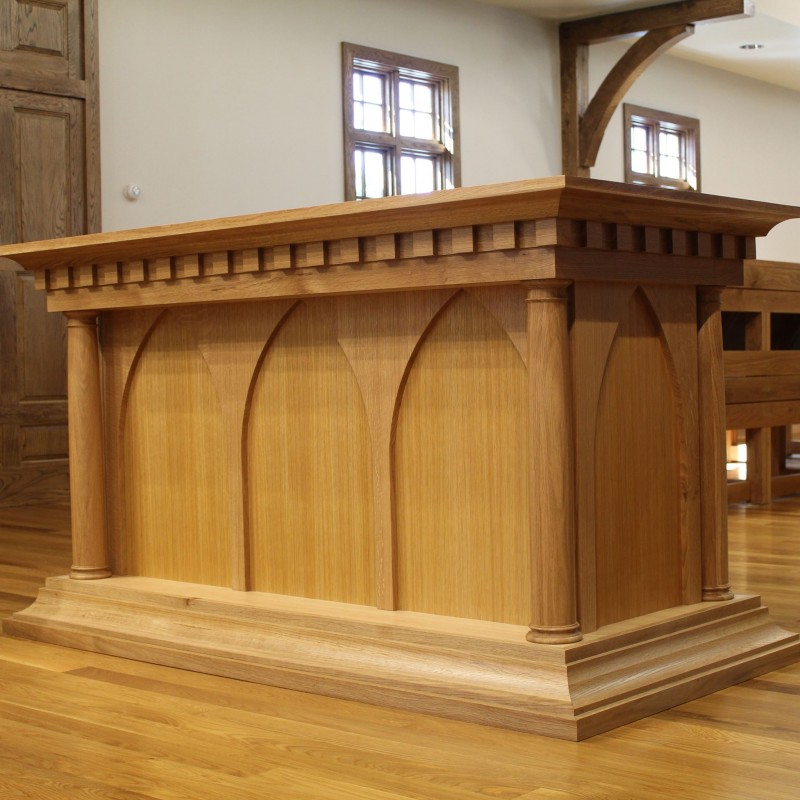 On Saturday, 9 September, a very important phase of our Church Renovation was completed. The new altar was installed and the altar stone, from our erstwhile altar was placed in the Sepulcher (the proper liturgical term for the space in the mensa’s surface to receive it) of the altar’s surface.

The altar was crafted for us by Daniel and Adam Taylor who operate Little John Woodworks in Keedysville, Maryland. From the community discussions, Fr. Joseph was able to communicate to Daniel and Adam what we needed. Of course, we wanted one altar (as opposed to the two that characterized our old church interior) which would mediate the monastic community and our guests; we wanted a solid altar, representing the enduring permanence of the sacrament we celebrated there and on which we are founded as a community; we wanted a beautiful altar, reflecting the arching beams above and the gothic arch on the door of the tabernacle, crafted for us by local artist, Ron Heath.

The beautiful altar we received from them fulfilled all our hopes.

Little John Woodworks has a website and a facebook page which gives you an idea of their fine work.

“Little John” is one of the pseudonyms employed by St. Nicholas Owen, S. J. (1562-1606), the patron saint of our artisans. Nicholas was the son of a Catholic Carpenter who worked as an itinerant carpenter by day and constructed “priest holes” in the great Catholic houses by night. A “priest hole” was hiding place–in a wall, chimney, even a concealed room–for priests of the English Mission whose celebration of the Catholic sacraments were illegal, considered treasonous, in the late sixteenth through the early seventeenth century. Nicholas had also been the servant of St. Edmond Campion and was arrested and tortured for having declared Edmond innocent. He never revealed any information under torture and was released. He probably masterminded the escape of Fr. Garnet from the Tower of London and was arrested, detained and interrogated under torture. Again, he revealed no information about the Catholic mission but died as a result of the torture. Just a couple of his hiding places are known, their location preserved as the family lore of the owners. But most of his constructions will never be known, so adept was his skill at concealing them. By the way, that skill earned him the honor of being considered the patron of magicians and illusionists.

Our new altar, however, is no illusion. In a very beautiful way, it articulates more clearly, the scared space, uniting us with our guests and defining our monastic enclosure.