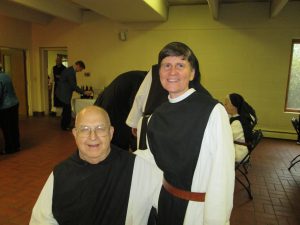 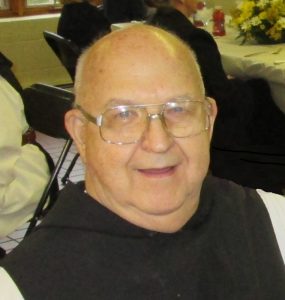 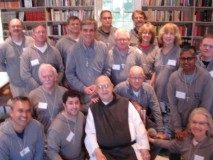 When I showed up six years ago I don’t think Fr. Paschal was one of my fans.  After all, here I was ‘a secular’ being given access to the monastery as I tried to understand it better so I could raise a little money and hopefully raise a few monks…it wasn’t normal to have a non-monk roaming around behind the enclosure and have an office, especially since it was the old Prior’s office, not some place in the basement.

We talked occasionally, but not much.  I would stop by the laundry where he was working to say hi and chat.  We quickly realized we enjoyed these times as long as we stayed away from politics, of the world and of the church.  I would sit in the chair opposite him and mostly listen.  Often he would lean forward and signal that I should get closer so he could tell me something I wasn’t supposed to know.  He would always preface these comments with ‘if you tell someone I told you this, I’ll have to kill you.’  I only think he was half kidding…then he would tell me something I wasn’t supposed to know (but often already did) that had happened in chapter or somewhere else.  He thought it very subversive that he was telling me these things.

Soon, however, I think the attitude began to change.  When he realized that I did understand the life, didn’t overstep my bounds (too often) and some of the things I was suggesting and doing seemed to be working, he began to come around and I found a friendship growing.

I wondered what his reaction was going to be when the community, really the Abbot Robert, invited me to sit in choir and have a seat in refectory.  This too was highly unorthodox (still is) and Paschal was nothing if not orthodox.  Then when I was given my own room to stay when here, I worried some of his reaction, as well as some of the other monks.  I think he was comforted that I had never asked for any of this-I was way too shy  to ask for these privileges-and that the Abbot had suggested it and the other monks thought it was ok.

His overall reaction became positive, I think, when Father James gave me a choir stall next to his.  I could help him from the walker into the stall when he was still sitting in choir.  Often I helped him find a book or something.  Once, when he lost one volume of his Liturgy of the Hours, I found it with other copies  in the Chapter room.  When I left it in his choir stall he was quite happy I had found it.  (We talked about me having those books when he died to remember him but by the time I went looking for them after he passed they were already in the novitiate for use;  probably a better place so that Paschal’s books continued to bear fruit in new monks, hopefully.)

At one point, about three years ago, I think, we began to have more deep discussions about life, monastic life, politics (couldn’t be on more opposite sides of that fence) and the future.  He constantly urged me to enter, though I am too old and really not called to the monastery.   And he saw me, I think as a sounding board…after all Paschal began to mellow in later life but he was never without opinions.  He liked to try his opinions out on me and actually felt he enjoyed that I didn’t just sit there and nod my head and often told him I thought he was wrong.  Not that whatever I said ever changed his mind.

Four years ago I began a soup kitchen in Loudoun County.  I remember sitting in the laundry telling him what I was doing and that I was getting the churches, synagogues and mosques to participate.  I remember he was pained, really, when I told him the only churches I had no reaction from positive or negative were Catholic churches.  I could tell anything that perhaps indicated the Catholic Church was not perfect pained him.

He asked how I was raising money for it and I told him I wasn’t.  We didn’t need much and I was putting that in to get it started.  The next day, in my mailbox, (the mailbox area is the ‘information center’ at the monastery;  when a monk wants to deliver a message to another monk he will often leave a note in their mailbox), I found a wrinkled envelope, legal size with rumpled bills in it and a bunch of quarters and change.  On the outside of the envelope Paschal had written “for the soup kitchen.”  He made the first contribution to this program that is still going strong after four years.  In fact every time the kitchen operates the kitchen staff stands with a sign that says “Father Paschal’s Kitchen.”  He used to love to get those photographs which I would leave in his mailbox the morning after serving.

One time we had a very deep discussion about love.  He told me that besides his mother he had never said I love you to anyone…anyone.  I challenged him, of course, and said, ‘that can’t be true.’  He said it was.

That Sunday, at mass, during the passing of the peace, he and I exchanged the monastic ‘hug’ (an air hug, really, with hands on shoulders, a lean in, but no real contact) and I said ‘I love you,’ to him as I leaned forward.

And Paschal said ‘I love you too.’

That to me is the real story of Fr. Paschal Balkan.  A man, flawed as we all are, with a deep seated love of his church and his monastic community and other people…and just as he was often not able to effect the change he wished to see, he did change himself.  He began to love more, I think, as he got older.  Oh he was still a little ‘crusty’ and cantankerous, anyone who knew him,  knew that.  But the so-called mellowing of Paschal Balkan was much deeper than a change of attitude-it was a change of heart about love.  I believe that.

When it was clear he wasn’t going to live much longer, the Abbot, knowing our special relationship, called me at home to tell me he was at Winchester Medical Center and not responding.  I was at the abbey that day but had a series of meetings to get home to so I told the Abbot I would visit the next morning-would get up early and drive out to see him.

As I drove down the long road out of the monastery, something made me turn right rather than left on Route 7 and head out to the medical center. I’m not saying I had a Damascus Road experience, just a gentle tug that said ‘maybe you better go tonight.’

When I got there Br. Efrain and Abbot Joseph, who had been sitting with him all day, greeted me a little surprised to see me.  I told them about the ‘tug’ that lead me there.

Fr. Joseph said he had not been responding at all.  His eyes were open but he didn’t hear anything, his hearing aid batteries long gone dead not helping that.

I leaned over him and started talking to him.  I told him I was there… his eyes did open, as Fr. Joseph said they might.   And then he smiled.  I’m not talking about a ‘oh, was that a smile?’ type smile. I mean a smile.  He looked at me and smiled.  He had responded to me.

That’s when I knew it wouldn’t be long, actually.  And sure enough, the next morning after mass, the Abbot called me again to tell me he had died at 7:09am.  If I had waited until the next day I would not have seen him again alive.  And I wouldn’t have seen him smile.

The timing of his death, unfortunately, has made my being there for his funeral impossible.  I am committed to a college Board meeting and several events where I am the emcee on the Saturday of his celebration.  I would have wanted to take several turns reading the Psalms with the community on that day, to say goodbye.

But I have to admit I don’t mind not seeing him lying there in the church, no longer with us.  The funeral home usually does such a great job preparing the body, but it is still a body.

I don’t want to see him that way.  I’d rather remember that smile.

Rest in peace my brother.  I love you.