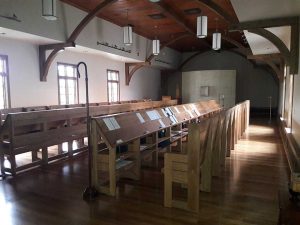 After six months of construction, the monks of the Abbey celebrated First Vespers on the evening of Saturday, April 29th, in their newly-renovated chapel. The next day, the congregation joined the monks for the first mass.

The gasps were audible as our guests arrived through the doors to see the new worship space. Comments ranged from “It looks so big!” to “This looks like a monastery chapel,” and were mixed with simple gestures of thanksgiving that the work was completed. The difference between the current and former chapel is so stark that one would never think it was the same place.

Several features make the chapel unique. The tabernacle is located in the center of a wall toward the back of the church. It was designed and built by Ron Heath, a great friend of the monastery, and is special because it continues through the other side of the wall. There, the monks have a private worship space for their silence and meditation.

There are 24 choir stalls, 12 on each side, that are constructed of beautiful wood. The wood is actually so heavy that the monks had to practice putting their seats up to stand because the seats would hit the back of the stall and make a loud bang! The windows are also different and much larger than the ones in the past, bringing in much-needed light.

Of course, the mysterious stained glass window at the back of the chapel has been carefully kept intact and will soon be restored. This window, which just appeared when we took the shutters off the back of the church to paint a couple of years ago, is still a puzzle as to its origin. Nobody knows where it came from or how it got here, but now it is iconic to the monastery.

Everyone is encouraged to visit us to see the reinvigorated worship space that is worthy of our great Lord, and is offered in dedication to His service and prayer. 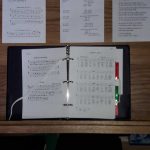 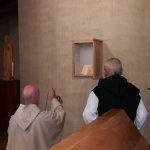 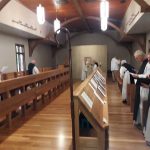 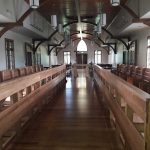