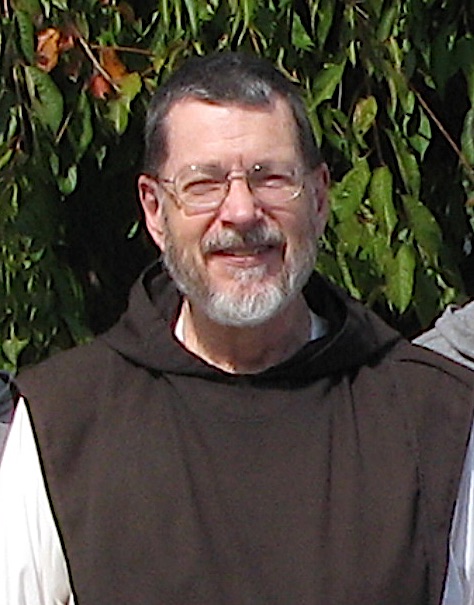 On January 5, 1942, Robert T. Barnes was born to Mary Evoy Barnes and her husband, Robert Barnes, Sr., of Maryland’s Eastern Shore. Robert grew up at their home on Lindale Avenue, Baltimore, with his younger brother Jon, and was a member of Little Flower Catholic Parish. Robert went to public school and attended “release time” for Catholic Instruction and proceeding to the Polytechnic Institute of Baltimore for his high school years. Reading an article in Columbia Magazine about St. Joseph’s Abbey, the Trappist monastery in Spencer Massachusetts, roused an interest in monastic life. His uncle, a priest of the Archdiocese, pointed out that there was an Abbey closer to home, Holy Cross Abbey in Berryville, Virginia. Robert persuaded his parents to let him make a retreat there and he was sold on the monastic life. His mother, however, glancing through the copy of St. Benedict’s Rule purchased at the Abbey’s miniscule shop, happened upon the chapter about issuing “drawers” to the monks when they travelled outside the enclosure and wondered what sort of outfit this monastery could be. Inheriting the stubbornness of both sides of the family, young Robbie was undeterred. Because of his age, the vocation director at the Abbey advised him to wait a year and study Latin–and a few other pre-theology subjects–at St. Charles Seminary on North Paca Street in Baltimore.

Robert entered Holy Cross Abbey on July 7, 1961. One could say they were interesting years, though the isolation of the novitiate shielded him from the controversies surrounding the retirement of Berryville’s first Abbot, Dom Hugh McKiernan. During his years of canonical formation, he experienced Fr. Thomas Aquinas Porter of Holy Trinity Abbey, Utah, as his new superior and somehow survived a tractor accident that punctured his liver, some time after his first profession on August 15, 1963. His major disappointment in recovering was to learn that the solemn vows pronounced, in articulo mortis, to Dom Thomas were merely conditional, depending upon his death. Returning to health, meant returning to the scrutiny of canonical formation.

Soon after, Fr. Edward McCorkle arrived at Holy Cross Abbey, returning from Spencer’s foundation in Chile. He was elected Abbot, yet another change of superior in a few short years. If there was a certain lack of security, there was also the excitement of a renewed interest in monastic studies during those years. As a candidate for the choir, young Robert was subjected to in-house theology classes taught by an assortment of characters, a few stimulating, most soporific. But there was a good library at Berryville and an interest in primitive monastic life preempted Robert’s attraction to the priesthood. Although he was sent to complete his studies at Catholic University’s School of Theology, along with Frater Edmund Flynn, Robert would have been content to remain a Deacon, rather than proceed to priestly ordination. What a different life would have been his! But he bowed to abbatial obedience and proceeded to ordination on May 19, 1970.

In 1977, Fr. Edward appointed him Prior of the community, an office he also would fulfill under two other superiors, Fr. Flavian Burns (Gethsemani Abbey)and Abbot Mark Delery (Spencer). Robert also served the community as Sacristan, Assistant Bakery Manager to Br. Stephen McGuire, Bakery Manager and community cook. Fr. Flavian appointed him Director of Novices and to prepare for that role, he asked to enroll in a Master’s program at Loyola College, Columbia, Maryland. These two years achieving the degree constituted a creative and personally fulfilling time of growth and discovery for Robert. Eventually he also served as Master of Ceremonies at a time when the Spencer Office was introduced to the choir.

After Br. Benedict retired as superior in 1998, Robert was elected Abbot for his first six year term; he was later re-elected twice serving a total of eighteen years, bringing him to the threshold of the retirement age stipulated by our Constitutions. As such, he was the first superior of Holy Cross to fulfill such a lengthy mandate. They were not easy years, a real transition between old accretions, a renewed model of monastic life that had not yet clearly emerged and the original founders of the community dying along with the experiments following Vatican II.

One of the less well known aspects of Robert’s tastes was his enjoyment of Gilbert and Sullivan’s Operettas. If one of their characters is a caricature of Robert Barnes it would be Frederic, the unwilling pirate apprentice from the Pirates of Penzance. Frederic may loathe his larcenous companions but his sense of duty compels his loyalty to them and their adventures. Fr. Robert didn’t loathe his coreligionists, but his sense of duty propelled him through many obligations of his office that were not congenial to him. If he didn’t dwell on what he didn’t like as part of his responsibilities, that definitely took a toll on his energies. He was never really comfortable as a teacher or administrator and financial meetings left him as befuddled as before. But he’d soldier on. What he strove to value was the individual’s value and dignity; he tried to overcome his natural prejudices and preferences in order to be fair. He had no particular agenda as abbot but did try to allow what he could never imagine on his own to emerge. At the same time, he saw it as his responsibility to maintain certain traditions, but did not always understand what sort of encouragement others needed to contribute creatively. He was certainly a humble man in his exercise of office and permitted criticism of his views and decisions in community discussions if that could facilitate needed change. His occasional flashes of temper certainly added color to his regime.

That said, he also had a capacity for courtesy and patient listening and demonstrated that a confessor could simultaneously be gentle and very challenging. A very private person, he was capable of self-disclosure if it would help the other person.

If he had no program for his mandate, a number of significant developments were allowed to emerge during his leadership: identifying and facing the challenges of an ageing community; the support of our sister house, Our Lady of the Angels in Crozet, Virginia; strategic planning for our future; the foundations for better interpersonal relations, rather than being hermits under the same roof; improved ecological stewardship; developing a firmer financial basis; updating bookkeeping and fiscal responsibility; shared leadership; renewing our monastic vision; our rapport with the broader community in Clarke County; the growth of our Lay Cistercians. I don’t think he’d take any credit for any of these and would be the first to admit what others in the community contributed to these areas. Many individuals who love this place can attest to the modesty, unselfconscious accessibility of Fr. Robert, his kindness and care for people in their needs.

When he had completed his term as Abbot, he gladly relinquished his responsibilities and was equally relieved to see his demanding life coming to an end. My sense in listening to him in his final months was that he had lived a complete life and had completed his mission as only he could. There was, I believe a real freedom from care and carefree dimension to his retirement. Equally real and as deep–and palpable, I believe–was his hunger to return to God and an unmitigated trust in God’s mercy.

Schedule for the Funeral of the Right Reverend Robert Barnes