A beautiful mass in the Abbey church with Father Joseph presiding and our cantor Father James in full voice was the culmination of our Monastic Immersion Weekend. 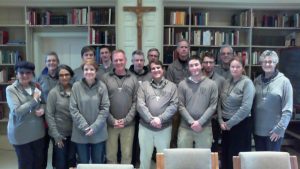 Father James is the key to the MIW because he not only prepares us to chant with a short choir practice but he also takes all the guesswork out of for us by providing an individual booklet for each Office.  No searching for our guests with Father James making sure to provide what we need.  He works awfully hard on the Monastic Immersion Weekend and was mumbling something about a long vacation in the Bahamas when I saw he and the Abbot walking away.  Needless to say the Abbot was shaking his head…

If that wasn’t enough, yesterday we had a conference with Fr. James entitled ‘work as prayer’ where he traced the importance of Jesus going away in between some of the most significant events in his life.

Then in the afternoon the class met 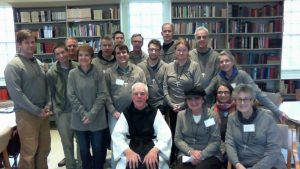 with Fr. Maurice Flood (in the center of this photo) whose Novice Master at Our Lady of Gethsemani was Thomas Merton.  Father Maurice said “Father Louis (Merton’s religious name) was serious but had a fun way to him too. I handled sending some of his manuscripts to the publisher as well as doing other chores for him though Father Patrick Hart was his secretary.” Father Maurice said when he was young in the monastery he often wondered if in old age (he’s. 80) he would find the ‘peacefulness he saw in the older monks.’ Those of us who spent the afternoon with him decided quickly that he had…

One interesting thing Fr. Maurice told us was that because in those times the monastery was completely silent, no newspapers etc., they had to hear from the Abbot at dinner that ‘Father Louis had died.’

As tradition continued several monks came to the Retreat House to see the group off with God’s speed.  The MIWers had just finished a game called “Where in the world is Uncle Louie” that asked them to find Thomas Merton in a picture from Gethsemani in the 50’s…there were several hundred monks in those days and few were able to find the famous monk.

Next MIW is for men only in September.  It’s filling up so if you are interested email companions@virginiatrappists.org soon.