Belinda Burwell, veterinarian and founder of Blue Ridge Wildlife Center in Boyce, Virginia, explained why she decided to release two hawks on Sunday rather than only a single bird as originally planned.

“We decided to release the other juvenile red shouldered hawk on Sunday at the Abbey rather than take him back to Oakton where he was found,” Burwell said. “He was found on the ground with a broken wing under some really peculiar circumstances.”

Burwell said that the young hawk was involved in an accident related to a neighbor’s chicken yard and that the family that found the bird had reservations about whether it was wise to release it back into a potentially dangerous environment. Burwell decided that the Abbey’s 1200 acres of pasture and forest were a good alternative to the hawk’s originally territory.

“This hawk may or may not stay in the area after he is released,” Burwell said. “Part of his challenge will be to find his own hunting territory.”

Burwell said that BRWC works with over 200 species of animal and that the number of injured animals increases every year.

“This year we are seeing a 50% increase in the number of animals coming through our doors,” Burwell said. “Last year we released about 1,000 animals. This year it will be more.”

Burwell said that most of the animals brought to BRWC have become injured, orphaned, or sickened as a consequence of development pressure that has taken place within their habitat. The work of the Blue Ridge Wildlife Center mitigates some of that damage.

With the neighboring counties of Loudoun to the east and Frederick to the west becoming increasingly more populated, the Trappist monks of Holy Cross Abbey have recently increased their efforts to sustain not only their rural lifestyle but also the 1,200 acres where the monastery is located. In addition to the 50+ acre “green” cemetery opened in March, the monks have dedicated 150 acres to natural vegetable production and have also increased measures to protect the monastery’s two mile of Shenandoah River frontage.

The monastery’s two-square miles of open space offer an ideal area for releasing not only raptors, but owls as well according to Burwell. 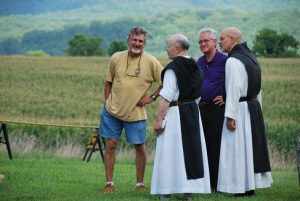 “All of the animals that release play an important role in healthy ecosystems,” Burwell said. “When we release a rehabilitated adult hawk, eagle, or owl, it is very rewarding. This hawk was injured when he was struck by a vehicle on the road, a very unnatural event. It feels very good to be able to help them recover from this kind of accident.”

On Sunday Burwell captivated the onlookers as she reached into a plastic pet carrier and, as if by magic, pulled out the first of the two powerful raptors. Burwell fearlessly allowed the bird’s menacing talons to grip her leather glove while its sharp beak hovered near her unprotected face. Burwell slowly and confidently displayed the bird to the group as she described its lifestyle and habitat needs.

Then, suddenly, the bird seemed to understand that Burwell’s hand offered support and not restraint. With a powerful flap of its wings the bird exploded into the sky leaving several of its molting feathers behind in its wake much to the glee of the applauding crowd.

Within seconds the bird had disappeared into the distance and hopefully far from future encounters with car fenders.

But as rewarding as rehabilitating injured animals can be, it comes with the expense of paying for professional staff and equipment needed to get the job done properly. How expensive is it to rehabilitate a red-tailed hawk?

“It depends on the type of injury, whether they need surgery and radiographs, and how long they need to stay at Center undergoing rehabilitation,” Burwell said. “It may cost anywhere from $200 to $1,000 per bird.” 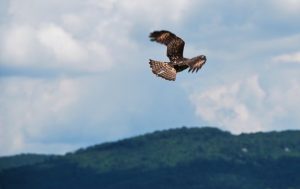