The Trappist monks of Holy Cross Abbey will be featured on WAMU 88.5’s award winning program “Metro Connection”. The program will air this Friday at 1:00pm (with a rebroadcast Saturday at 7:00 am) and focus on environmental and fiscal and sustainability efforts being implemented at the Abbey.

“The story here has fascinated me and I am glad to have the opportunity to visit the monastery and better understand what life is like for the monks” said Metro Connection host Rebecca Sheir. 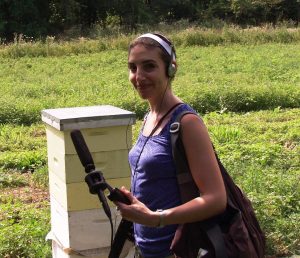 During her three day visit to the Abbey – Sheir stayed as a guest in the monastery’s 16-room retreat house – she interviewed several members of the monastic community as well as many other non-monastic people who help keep the sprawling complex operating. Cattle farmer Ronnie Hope, whose family has leased nearly a thousand acres of pasture and cropland from the monks for over thirty years, provided background information on agricultural issues; Great Country Farm’s owner Kate Zurschmeide talked about the natural farming methods being used to grow fruits and vegetables on a portion of the monastery’s land; and several monks described the challenges of observing the monastic lifestyle in an age when monasticism is often seen as an oddity rather than a viable way of life.

Metro Connection is produced by WAMU 88.5 News and features stories from local contributors whose passion and knowledge offer fresh perspectives on living, working, and playing in and around the nation’s capital. The show has won many awards and was selected by the Chesapeake Associated Press Broadcasters’ Association as “Best Public Affairs Program”.

Host Rebecca Sheir joined WAMU 88.5 in 2009 as a news anchor, host and reporter. She became the host of Metro Connection in August 2010.

As Sheir walked the monastery grounds during her visit, her headphones and tape recorder always at the ready, she recorded over nine-hours of raw interviews and sound footage. Sounds ranging from hives of buzzing honeybees, water flowing over rocks in the Shenandoah River as well as Vespers chanted by the monks in the Abbey’s church were all captured by Sheir’s practiced microphone.

“There are just so many interesting stories here,” Sheir commented near the end of her visit. “We may well end up with more than one story from Holy Cross Abbey.

Last week was Sheir’s first visit to Clarke County since moving to Washington, D.C. in 2009. She comes to the nation’s capital by way of Alaska, where she traveled amongst the moose and mountains as the host of “AK,” the award-winning show on the Alaska Public Radio Network. She also reported for NPR member station KTOO in Juneau.

Prior to her career as a radio journalist Sheir received her BA from Columbia University in New York City, where she also worked in Off-Broadway theater production: first with Stephen Sondheim’s Young Playwrights Inc., then with Naked Angels Theater Company.

She holds an MFA in Creative Nonfiction from the University of Iowa.