As Cool Spring Natural Cemetery’s new chapel building nears completion, the structure’s designer and builder, Ron Heath of Winchester, Virginia, decided on Friday that the long-anticipated time for adding a wind vane to the chapel’s tower peak had finally arrived. 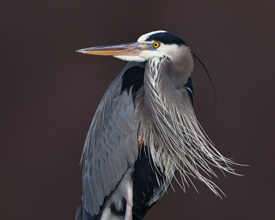 While providing visitors with a valuable snippet of real-time weather information upon their arrival at Holy Cross Abbey, the large, copper replica of the native Great Blue Heron is also a symbol of the monastery’s commitment to preserving the natural heritage that abounds on the 1200-acre farm.

Heath said that he experienced a special moment as he maneuvered the four-foot wingspan, 40-pound life-sized bird to the peak of the chapel’s bell tower.

“I was having some difficulty finding a way to get the wings up through the rafters and was beginning to think that I would have to rig a pulley and rope to raise the bird along the outside wall,” Heath said. “But just as I was about to give up I moved the bird in just the right way and it slipped up through the bell tower rafters.”

As happy as Heath was to have the wind vane finally in position to mount on the building’s highest point, what happened next was even more pleasing.

“Just as the bird slipped through my gaze went past the wind vane and I caught a glimpse of an actual Blue Heron flying overhead,” Heath smiled.

Great Blue Herons are a daily sight for Heath as he works to complete the new structure. The long, gangly birds are nearly six-feet long from beak-to-toe when I flight. Their powerful wings scribe long and graceful arcs through the air as they fly back and forth between favorite fishing spots and the large nesting area on the monastery grounds.

Heath expects to have the new chapel building fully constructed in the next few weeks. With the building’s roof now almost finished Heath will soon turn his attention to hanging the bell in the tower, installation of a composting toilet facility and other final details.

Heath, who is an artist, expressed his creative skills both through paint, building design and carpentry.

“I like to think of the chapel’s open front as a kind of picture frame,” Heath said “Each ceremony that will be conducted here will be like a new painting in the frame.”

While the cemetery chapel’s position atop a small knoll makes it an ideal location for viewing the breathtaking vistas that surround the monastery, it also is now one of the higher points on the edge of hundreds of acres of open fields. To protect against the possibility of lightning danger, Heath has installed a set of custom-designed lightning arrestors the span from the peak bell tower to a long grounding rod.

“The cable and lightning rods are designed to move any possible electrical strike from the roof directly into the ground,” Heath said. “While it’s not very likely that people will be in the building during a lightning storm, the lightning rods give an added level of protection against the unexpected.”