The Trappists of Holy Cross Abbey, with the help of master builder Ron Heath, have been raising the roof of late. But there is no need to worry, the monks – and their guests alike – still value the many sounds of silence that grace the monastery’s grounds just an hour west of Washington, DC. But even so, the echo of a lone hammer near the Abbey’s entrance is now often heard as Heath nears completion of the new natural cemetery chapel. 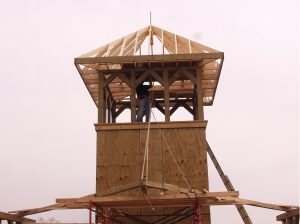 Heath, a resident of Winchester, Virginia has been building things for more than four-decades. He has also been a friend to the Holy Cross Abbey community for more than twenty years. So when the chance to design and build a cemetery chapel became available, Heath couldn’t wait to get started.

“I tell people that I have the best view in the world from up here,” Heath said standing in the cemetery bell tower while preparing the rope rigging that he will soon use to raise the first set of chapel ceiling rafters into place. 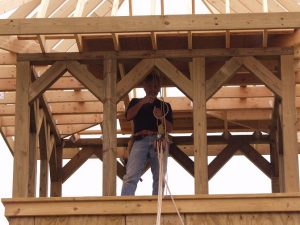 Heath methodically snakes the hoist rope through a series of pulleys anchored in the chapel’s bell tower. When everything is in place and only after the lift ropes have been properly attached to the rafters, Heath proceeds to easily hoist the rafters into place from the safety of the ground.

“Once the lifting ropes have been set up I simply position the rafters on the top of the wall supports and hoist them into place,” Heath said. For the sake of demonstrating the power of his rope approach, Heath pulls the rafters into place using only one hand.

When the rafters are finally in place vertically, Heath secures of the hoist rope and begins the process of nailing the rafters permanently in place.

Once the rafters and ceiling boards are securely fastened Heath plans to cover the roof with tin.

Cool Spring Natural Cemetery roof work is expected to be complete in about two weeks. 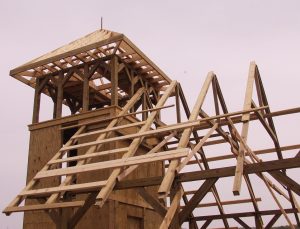 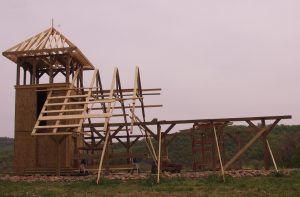