Ask any owner of a historic structure how much maintenance is required to keep the building in good condition and in many cases the reply will begin with a knowing chuckle and a roll of the eyes followed by “You have no idea!” 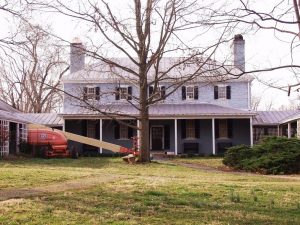 The stone manor house, the visually stunning focal point of Holy Cross Abbey in Berryville, Virginia, is one such structure.

Referred to as “the mansion” by the Trappist brothers who live in the more modern structures that surround the circa 1780 house, the building’s charm and Virginia elegance is offset only by its need for ongoing maintenance repair.

Even so, sagging roof supports, cracks in the plaster walls and a leaky roof have not diminished the monk’s love for the old building that has sat at the center of the Abbey’s day-to-day monastic life for over 60 years.

And with good reason.

Although much of the mansion’s history is anecdotal, the distillation of centuries of oral tradition about the now 1200-acre estate assembled from four other farms in 1950 when the Trappists first came to the northern Shenandoah Valley, the stories about the house and its previous occupants are rich and romantic. For instance, while there is historic proof that the young George Washington surveyed the property as part of his duties for Lord Fairfax, who lived roughly 20 miles south of the present-day site, stories of Washington attending parties in the mansion and perhaps bumping his head on a low ceiling beam while making his way downstairs to the wine cellar – Washington was unusually tall for his time at six feet, two inches – such stories can’t be definitively proven.

However, others stories about old house are certain. With its unusual stone slave quarters nearby, the house was witness warring soldiers during the Civil War’s Battle of Cool Spring in 1864. The late Brother James, who spent years documenting the two-day battle, unearthed unexploded Civil War-era shells near the house.

Despite all of its history, the 225-year-old structure has worn its age fairly well. From the outside the stately building remains solid and there are no known major problems with the foundation or stone walls.

Inside the building and around the periphery things are not as positive.

For example, initially unnoticed seepage from water entering through a chimney has caused plaster damage to the building’s upper rooms. Similarly, sagging porch roofs that form the Abbey’s cloister are the result of rotting support beams in need of immediate replacement.

Many of the mansion’s original glass window panes have cracks and need repair.

Recognizing that refurbishing the mansion and repairing the monastery cloister is a big under-taking, both in terms of time and money, the brothers at Holy Cross Abbey have begun the deliberate process of assessing the engineering needs of the building tempered by the financial reality of where the money will come from for repairs.

A group of interested friends recently met with Abbot Robert Barnes and other members of the Holy Cross community to offer suggestions and advice about moving forward with immediate repairs to the chimney and plaster walls as well as a commitment to developing a long-term plan for upkeep of the building.