Not only are black and white the traditional colors of the cowls and robes worn by the Abbey’s 14 Trappist monks, they are also the colors of choice for two American Bald Eagles who are permanent residents of the Abbey’s 1200 acres.

The two birds spent much of Monday morning perched in a giant sycamore tree on the Abbey’s grounds observing the spring farming activities and new construction now underway at the usually serene monastery.

The Trappist monks of Holy Cross Abbey, who live in accordance with the Rule of St. Benedict, a religious tradition established in the seventh century, have always placed a high value on silence and contemplation. 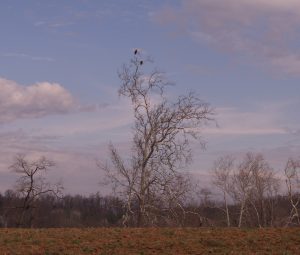 What the eagles may have been contemplating – as tractors plowed through the fields below and as forklifts unloaded lumber that will be used for a new cemetery chapel – isn’t known but they certainly appeared stoic.

On a hot March Monday the two large raptors were perched atop a large Sycamore tree for well over an hour as they silently observed the comings-and-goings along the mile-long Cool Spring Lane that leads through farm fields and pastures before ending at the monastery campus.

What surely caught the eye of the eagles are two new ventures at the monastery designed to raise income for the monks geared toward environmentally sustainable business practices. One venture involves the development of a “green” cemetery in the southeast corner of the Abbey’s property while the second new endeavor is a partial move away from the monastery’s cattle farming operation toward vegetable and fruit production on 110-acres of bottomland bordering the Shenandoah River.

For nearly the entire time that the monks have lived at Holy Cross Abbey, now some sixty-two years, the land surrounding the monastery church and living quarters has been devoted largely to cattle farming. When the monks first arrived in 1950 the cattle operations were managed and worked by young monks on horses. But as the age of the community increased over the years as fewer young men chose to enter the challenging life of a Trappist, the monks found it necessary to rent the land to local farmers.

For over thirty years cows have been a mainstay of monastery’s farm.

But in 2012 the monastic community decided to expand their agrarian interests to include fruits and vegetables; in part to protect the two-mile Shenandoah shoreline that borders the monastery’s eastern edge and in part to align the monastery’s farming practices with “greener” agricultural practices.

While cows will still graze on nearly 70-percent of the farm, bovine access to the Shenandoah River and the several springs that cross the property will be restricted – in part because of the vegetable field buffers between the pastures and river, and in part due to soon-to-be-installed stream fencing designed to keep the animals a safe distance from the water sources. 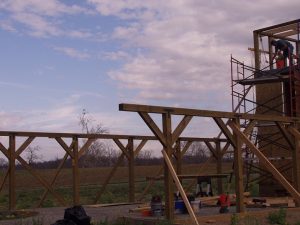 The Abbey’s Cool Spring Natural Cemetery demonstrates another side of the monk’s interest in environmentally sustainable business enterprises and their financial commitment to making their ideals into reality. Cool Spring Natural Cemetery will provide green burials over fifty-acres of easement-protected forest and meadowland bordering the Shenandoah River with sweeping views of the Blue Ridge Mountains.

So in a very real way, the seemingly opposite activities of growing food to sustain life and providing a place to receive a body at the end of life, are merely different aspects of an age-old Trappist tradition; living in harmony with God, man and nature.

The presence of the two American Bald Eagles is, perhaps, another sign that the monks’s dream of turning the Abbey’s nearly two-square-miles of land into an environmentally and financially self-sustaining enterprise is beginning to become a reality. Eagles, hawks, herons and geese as well as many other species of birds and wildlife all make their homes at the monastery. Both the vegetable farm and the natural cemetery will be managed in ways that enhance environmental sustainability rather than damage it.

Spring planting is already underway at the Abbey. For more information on the plans for monastery delivering vegetables and fruit from field to table please visit http://www.greatcountryfarms.com/

Likewise, the Abbey’s Cool Spring Natural Cemetery is nearing completion and is already offering “green” burial plots to customers interested in minimizing the impact of their death on the environment.

While “green burial” may be a new concept to some, there is really very little that is “new” about green burial. In many ways, green burial practices are really a revival of the traditional ways that people have dealt with end-of-life matters for thousands of years.

Green burial differs from current burial practices in that bodies may not be embalmed and simple, non-metal bio-degradable caskets are used. However, if a casket is not desired, only a shroud to cover the body is required. Likewise, headstones, if desired are made from local stones found on the monastery grounds. 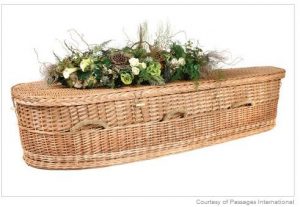 It wasn’t until the American Civil War that the practice of embalming became widespread when families needed a way transport dead servicemen from distant battlefields for burial elsewhere. Similarly, the thought of being buried in a traditional cemetery with manicured lawns and row after row of precisely placed graves doesn’t appeal to everyone.  People choosing green burial at Cool Spring Natural Cemetery can chose to be buried among the trees in a mature hardwood forest or select to be buried in a sunny meadow overlooking the Shenandoah River.

Cool Spring Natural Cemetery is open to people of all faiths – or no professed religion – who hope to make the impact of death as gentle as possible on the Earth.

Cool Spring Natural Cemetery has already begun accepting gravesite purchases and can accommodate burials now, although the cemetery chapel will not be completed for a few more weeks.