The mild February, temperatures in Berryville have regularly climbed to 60 degrees over the past month, proved to be a force that the Great County Farms team simply couldn’t resist. 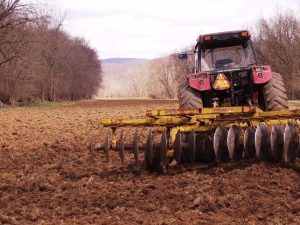 “With the ground temperatures this much warmer than normal we saw a window to begin working that we just couldn’t pass up” said Scott from Great Country Farms as he and another farmer, Gary, prepared to make the first pass with a plow.

Scott, who has farmed in the area for over 30 years, said that the shady area next to the river will be ideal for raising leafy crops like lettuce and salad greens. A large buffer area between the crop area and the river will protect against erosion and sediment loss.

As the two men prepared the tractor to begin plowing their excitement to learn what laid below the surface of the field was palpable. Soon Gary was in the operator’s seat of the large, orange Case tractor pointing the rig down the field. The soil appeared almost liquid as it rolled in waves away from the plow shares.

Deep, rich smells were released from the ground as the tractor moved up and down the field.

After a few plow passes Gary stopped the tractor and excitedly jumped down from the seat to share his first impressions of the soil with Scott.

“I didn’t hit a single rock” Gary said with a smile. “This is going to be an excellent field.”

Holy Cross Abbey and Great Country Farms plan to grow fruits and vegetables using a minimum reliance on fertilizers and pesticides. Natural river flooding will replenish soil nutrients while removable nylon fencing will protect crops from deer and other animals.